Thought I would share my well documented, yet under utilized fix for early Williams System 11 games up to and including Fire! Oh, the irony…they fixed this design flaw–one that would literally start a fire in the backbox–after the release of the game Fire!  A colleague of mine on Pinball Revolution, Grauwulf, actually had some crispy wires occur while playing a friend’s Pin*Bot due to this design flaw–he posted about it here and followed up with photos of the deep fried wire here.  That scenario should be more than enough reason to perform this relatively quick mod/fix.

I performed this fix on my Pin*Bot…which was in a few different collector’s hands before I got it last year at about this time (a different P*B than the one that caught on fire above).  The first thing I did was unplugged the the damn machine…no need to tempt fate.

Locate the two bridge rectifiers mounted to the inside of the backbox. Hard to miss.  Below are the innards of my Pin*Bot, but most games from this era will be the same. Bridges will be on the lower right hand side.

I’ll be putting fuses in line with the positive 18 and 25 volt power flow, so if the bridges short or anything else funky happens with the transformer, the fuse will blow and the machine won’t. The process is the same for each bridge.

Bridge will have four leads. One lead will lay side to side, the other three will be standing up and down. We are NOT looking to modify the one that lays on its side (and has two wires attached), NOR are we looking at the one that sits diagonally across from it. We need one of the remaining two. In Pin*Bot’s case here, they sport matching red wires on the top BR, and matching blue wires on the bottom one. Clay’s guide states that it doesn’t matter which of these two wires the fuse is put in line with as both are “AC” and run in line with each other. I chose the one at the top right terminal for both bridges. 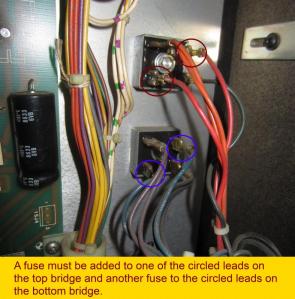 Snip the existing selected wire leaving enough room for both wires to reach the mounted fuse block. Affix a connector on each end of the snip. Mount a single fuse block near the rectifier being careful not to short it on any other nearby hardware. I pre-sunk a hole through the metal backbox plate with my cordless drill to make the mounting process easier…some may choose to mount them to the side of the backbox (in this case, new wire will have to be run for length). The connectors slide onto each lead of the fuse block. Williams chose to solder their slide connectors to the BR, so I did the same on the fuse block posts. Insert an 8AMP slow blow fuse. Check for continuity. Repeat process for the other BR.

Simple as that. Final product should look something like this:

It’s as simple as that…a sub-$5 fix/mod that could save you an insurance claim.

Further Reading:
Flipperwinkel – Part One of Clay’s guide that covers this fix (Jump to Section 2a)
Purcellville Pinball – Adding Fuses to System 11 games Fire! and before

One thought on “MODS: “Fireproofing” Pin*Bot and other early System 11 games”