In one of the very first essay-style articles on Credit Dot, I talked up the impending arrival of the Creature from the Black Lagoon speaker panel mod like it was the second coming of Christ himself. The brainchild of Jeff Thompson, the speaker panel added lights to the “Starlight Drive- In” sign, the moon, the UFO and the tail lights of all the classic cars lined up watching the DMD. Supposedly, it was something that was to be included in production games, but the project went over-budget and it was axed from the final version. Mr. Thompson has now begun asking for payment, and the first few batches of the mod are being installed in Creeches across the globe. Unfortunately, as of writing, it has been indicated by Mr. Thompson that all of the mods have been spoken for. However, perhaps if you e-mail him directly or message him on Pinside (username: thompso9, and be patient for a response), you can be put on a stand-by list, as there are bound to be people who will back out. 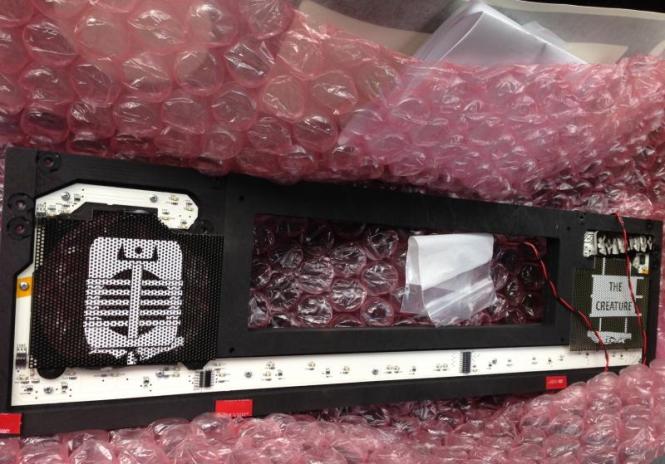 The mod as it arrived on my doorstep.

The panel arrived at my door this past week, and it took everything I had to not clear my schedule and install the mod upon arrival. However, things like this are best done when interruptions are minimized, and I waited until Saturday afternoon for installation, when I knew I’d have a chunk of spare time to dedicate. The mod was packaged extremely well. Contents of the box, as it arrived, included: the wooden panel backer with embedded PCB light boards, four new screws to mount the DMD, detailed instructions and the optional vinyl mask for the standard speaker plastic. Not being an owner of the Deluxe “chromed” panel from Classic Playfield Reproductions–and it wasn’t without a couple of failed attempts at trying to track one down in the past few months–I paid the extra ten bucks for the vinyl light mask that would have to be affixed to the back of my current speaker panel overlay. My total cost, shipping and optional vinyl mask included, was $180.00USD.

The sticky black mask peeled back to reveal the red taillights.

If you have the CPR speaker overlay, this step that is not needed, as it will already has the proper masking cut-outs for the lights. If you are using the original that is on your machine, like me, you’ll have to prep the overlay for installation of the $10 vinyl mask. Removing the speaker plastic from the wood panel was the first step and it was extremely easy. Twenty years of age had dried out the adhesive that held the plastic to the original wood. The wood side adhesive may have dried out, but the other side, that affixed the original blackout mask to the plastic was still holding strong. This was by far the most difficult and time consuming step of the entire installation. The blackout mask came off in large sticky strips, leaving behind a stickier film on the printed side of the plastic. In some places, the paper would pull off but leave behind a thin layer of black paper fibre. Despite the difficulty, it was cool to see the red tail lights first appear from under the blackout; they were originally left uncovered by the white paint mask which all but proves for certain that John Trudeau and the art department had visions of lighting them at one point. 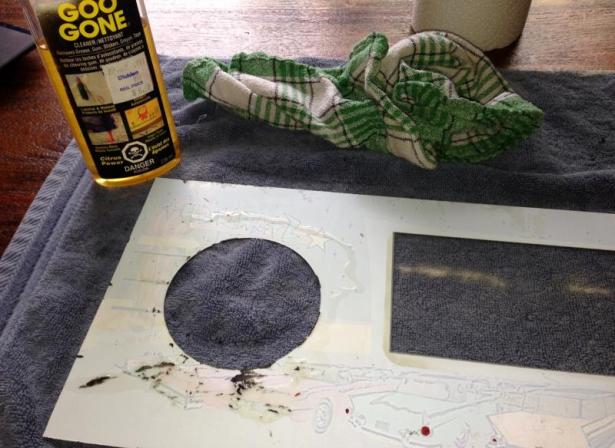 The most frustrating part of this process is that you cannot use any sort of scraper to aid in removal of the blackout mask, as there is a chance you will damage the back-printed artwork. Thank god for my caveman-like, unkempt fingernails, as they were the perfect tool to lift and scrape the adhesive without damaging the plastic. Goo-Gone was also a godsend, batting cleanup, and removing any left behind adhesive and black paper fibre. A final rinse with soap and water and the panel backside was ready for the vinyl mask. 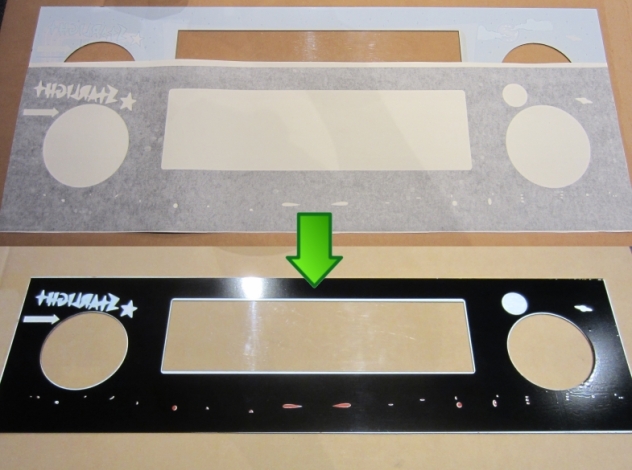 Installing the vinyl light mask on the original speaker panel. No fancy CPR panel for this guy, unfortunately.

The reason the vinyl mask needs to be applied is that it contains cut-outs that will focus the light from the PCB onto one single area, rather than being diffused and muddy. Thus, getting the cut-outs lined up with the taillights, Starlight sign, moon and UFO is extremely important. The instructions tell of both the wet and dry method of getting the vinyl mask onto the panel. The dry method is pretty much peel the vinyl mask so the sticky side is exposed, stick it onto the panel, remove the second backing and pray that you got it right. Some Pinside users who have purchased the mod have shared that cutting the large mask into smaller, more manageable sections has helped make placement more precise. I, however, left it as one piece and went with the wet method. I soaked the backside of the panel with Windex, peeled the backing so the sticky side was exposed, and placed it sticky side down on the panel. The Windex allowed me to shift and move the mask exactly where I wanted it without the adhesive taking permanent hold. Once properly lined up with the art, I squeegeed out the Windex allowing the adhesive to bond, and then peeled off the second paper backing. It took just one attempt, and it turned out pretty well. 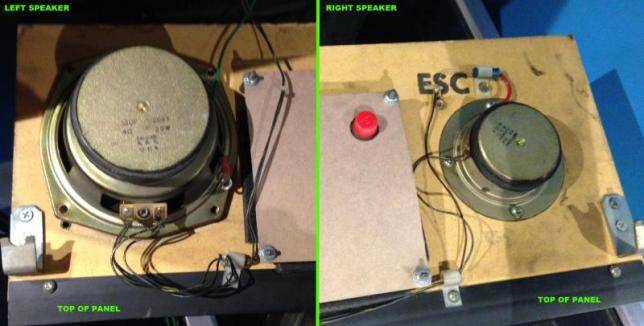 Speaker and hardware configuration of the original wood panel.

The replacement wood panel is made of quality materials and is precision cut. All counter-sunk T-nuts are placed accurately with respect to the original. There is a plastic cut-out used to help focus the cascade effect of the Starlight sign, and on my unit, it had come loose and was floating around in the box. Thankfully, it wasn’t trashed with the packaging materials, and two dabs of glue put the plastic back in place. The rest of the installation was a breeze, as it was just a matter of moving over the speakers, DMD, plastic H-Channel and hardware from the old wood panel to the new one. The only hardware items that do not get recycled are four mounting screws that hold the DMD-–they are replaced by the four long screws included in order to accommodate, I assume, a ColorDMD. Two holes need to be drilled to hold the capacitor and wire clip that are in line with the smaller speaker. I found that they needed to be placed a little higher than their original locations, as to not damage the embedded PCB on the front of the panel. The completed masked plastic overlay from above was affixed to the front of the wood panel with the included 3M double-sided tape, and that finished the changeover. 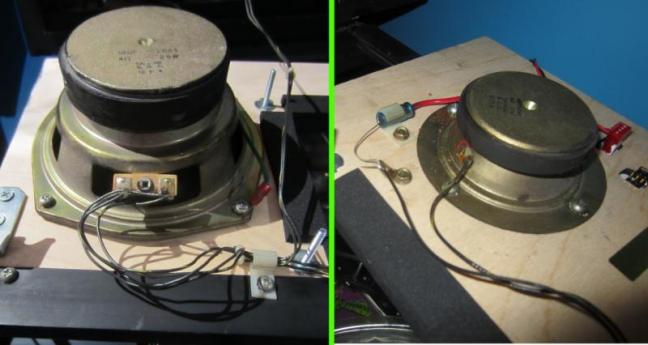 Speakers and hardware installed on the new panel. Note the placement of the speaker capacitor and wire clip. Small starter holes for these two screws needed to be drilled with care as to not damage the embedded PCB on the other side.

The panel has a jumper located on the back that will allow the taillights to stay on, or perform dynamically, which makes them turn on an off at random intervals. It is a neat touch. It ships dynamic and I left it that way, but simply moving the jumper over one pin will make the taillights static. I plugged the mod’s four pin connector into J116 as indicated in the instructions. The red, yellow and black cable that runs from the panel has both a female connector plug and male pins on it. The mod’s female connector plugs directly onto the board at J116 (or J117, J118 can also be used), and the female connector originally plugged into the board is connected to the male pins on the panel’s wire. I fired the game up and the panel lit with no issues. It looks as if the panel lights need time to warm up: upon start-up, the DMD will be fully into its attract sequence before dynamic light movement of the Starlight sign and taillights begin.

Start to finish, the installation took less than two hours. I like that this mod is shipped with all the hard stuff done for you. Many DIY modders may feel differently, relishing a challenge. I was very happy that this mod wasn’t shipped as a handful of PCBs to affix onto (and embed into) the original wooden panel. Shipping a plug-and-play wooden panel, complete with reproduction speaker grilles, was the way to go. The embedded lights on the PCBs are nice and bright–the blue of the Starlight sign really pops–and the mask does a good job on focussing the light source. However, as I was installing this, I thought to myself: “Did I just spend $180.00USD for a few small lights on a panel I hardly ever look up at?” I also realized that these funds were about half-way to the price of a ColorDMD, which is the ultimate speaker panel upgrade. I’m kind of torn here. Don’t get me wrong, there is definitely $180.00USD worth of craftsmanship in the mod, and the end product is fantastic, but I’m left to wonder what these lights really add to the game, especially in a game that has so many other mods and upgrades to consider. Look at it this way: if you invested in the CPR Deluxe speaker plastic, this mod AND a ColorDMD, you would be the proud owner of a $700.00USD+ speaker panel. That’s about the price I paid for my Williams Fire! at Allentown this year, for crying out loud. 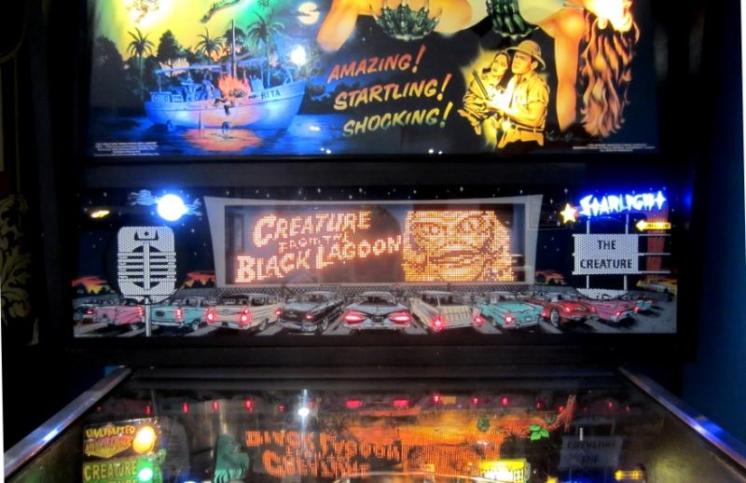 The interest in the mod is definitely there, and the early reviews have people raving about it. Pinside user nudgefree stated, “To me it ranks right up there with the Tron Arcade mod as ‘Best mod ever,’” while user schlockdoc says “It looks awesome with the Color DMD and deluxe panel. Worth the wait.” I don’t regret my decision of buying in at all: I’m spending more time looking up at the Creech DMD now than I ever did! The game is a keeper for me, so I felt compelled. I have a new set of ramps, plastics and hardware to put onto the game in the near future to make it an above average example, so this mod is the icing on the cake. Given the five year ordeal of getting these panels made, it looked to be now or never for this mod. You’ll probably never see a run of these again, and if they are re-ran by another individual or company, they probably won’t be made with such precision or to such a high standard of quality. This is a package that wouldn’t be easily replicated in a basement or garage by a hobbyist modder, either. I’m thankful that Mr.Thompson has accepted the call and released these speaker panels to a community hungry for this particular mod, and I can’t wait to hear of his future projects (rumoured: Twilight Zone lit speaker panels). All that is left now, I guess, is to start saving my pennies for a ColorDMD to REALLY make this Creech speaker panel complete…