(The following article contains one video where multiple pairs of cartoon breasts can be seen. Maybe this is not the best article to read at the family dinner table or at the office, however, you can be the judge on its appropriateness given the previous warning. Enjoy.)

I get it…the whole philosophy of pinball was based on capitalism: getting the maximum amount of quarters out of the pockets of impressionable young boys and into the coin box. The easiest way to do this, short of making a fantastic machine whose layout and gameplay scream for repeat plays, is by filling the backglass and playfield with barely clad women to attract the target teenage demographic. Roy Parker was the grandfather of the sexy pinball lady, illustrating babes in bikinis beginning in the 1950s for Gottlieb, followed closely a decade-and-a-half later by Dave Christensen, who perfected the art of the well endowed woman well into the 80s. Grown-up pinball enthusiasts far and wide, who are probably complete gentlemen outside of the hobby, have kept up the tradition of talking like horny, sex-starved teenage boys when it comes to the subject of women in pinball art. Now that we children of the 80s are “all growed up”, we are seeing objectification rear its ugly head in some very extreme forms. Far be it for me to bellyache about passive objectification of women in pinball art, but one particular instance has been weighing on my mind for quite some time. I’m not the one to carry the feminist rally flag into the pinball arena–others are doing it much better than I ever could–however, the appearance of an Elvira and the Party Monsters re-theme courtesy of Downington, PA-based retailer Gameroom Collectibles really rubbed me the wrong way…so to speak. 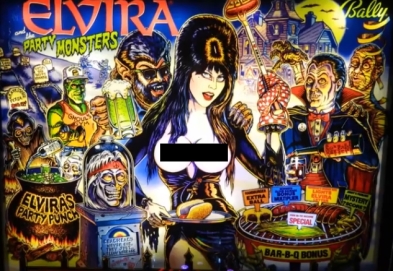 I was introduced to the game via a YouTube video released by the Gameroom Collectibles guys that appeared about seven months ago. The video chronicled the modifications and restoration work done by the GRC team to a 1989 Bally Elvira and the Party Monsters pinball machine. The seductively-dressed Elvira had what little modesty she possessed completely removed: the game features a bare-breasted Mistress of the Dark on the backglass and throughout the playfield. One change on a playfield insert goes as far as to add a tuft of pubic hair to the kneeling illustrated Elvira. Further, the jelly-plastic Boogie Men that danced near the Party Monsters pop bumpers were replaced with a giant set of moulded plastic boobs that shake and dance just as Boogie Men did. This whole re-theme has been dubbed “Elvira and the Boobie Monsters” or “Elvira and the Party Boobs”. Elvira’s breasts on the backglass and near the flippers are cartoonishly large and ill-proportioned, but the effect is clear. Jim from Gameroom Collectibles, your host of the video, is quick to point out that the playfield art was not created in-house, but rather acquired from Robert Winter, a macabre enthusiast and all-around good guy in the pinball hobby. In a Pinside thread, it is revealed that Burlington, WI user “CaptainNeo” was the artist who fleshed out the breasts and applied the clearcoat. They also state that Party Monsters designer Dennis Nordman gave his “thumb of approval” (a mixed metaphor of thumbs up and seal of approval, I’m assuming?) by way of a Facebook post. No word on how original Party Monsters artist Greg Freres feels about the changes to his original artwork.

I’m a huge Elvira fan. A signed picture of her graces my wall of autographs (the wall happens to be in my bathroom, but that’s besides the point). I’ve been a fan of her over-the-top innuendo-laden comedy since I was very young, thanks to some very liberal parents who let me consume such media at a young age. The key to Cassandra Petersen’s classic character is that she was naughty and overtly sexual without actually being lewd or explicitly obscene. It was sex-based comedy for the whole family, relying on double entendre and knee-slapping one-liners to drive home, with a knowing wink, that the whole performance of the Elvira character was a self-reflexive farce. The character was the embodiment of excess without excessive sexuality. Much of her popularity stemmed from from horndog teens in the 80s dreaming of what Elvira looked like without her clothes on. The Elvira and the Party Monsters retheme completely removes this key mystique. Those familiar with Ms. Peterson’s oeuvre will know that nude pictures of her did surface in High Society magazine and on the cover of a Tom Waits album, but this was long before the Elvira character was ever created. The Elvira character proper, to my knowledge, has never bared it all, leaving everything to the imagination. The whole basis of her 1988 movie was to rally against the conservative extremists of small-town America who labelled her a bad influence and a cheap slut, and throughout the film she works to prove to them that her appearance and mannerisms were a sign of expression and freedom, and not a raunchy display of ill-morals. Stand-up comics would be booed off any stage in North America using the corny sexual innuendo Ms. Petersen employed in her act, but it worked in the context of the Elvira character given her extreme appearance. Both Elvira pin-games worked in the same manner: they walked the fine line between suggestive and lewd, never crossing into vulgar territory. Therein lied the charm. Heck, the games even added a failsafe of “clean” versions of audio and, in the case of Party Monsters, offered a “modesty sticker” operators could place over Elvira’s cleavage on the backglass to allow the games to be placed within more conservative environments. The Gameroom Collectibles machine destroys that delectate balance both machines strove for and pulls the game, kicking and screaming, into lewd territory. I don’t think anyone would argue that Elvira’s character embodied the term “classy”, but any class she tried to inject into the character is completely removed by the Gameroom Collectibles re-theme.

Original Bally flyer for EATPM. The text relies heavily on double entendre and “the tease”.

I think the ultimate irony of the video appears when Jim from Gameroom Collectibles dramatically points out that there was a penis carved into the side of the cabinet when it first arrived as a restoration candidate. For some, the addition of a topless Elvira is just as disgraceful as the crudely carved penis. One is expertly crafted with an airbrush and sealed under a glossy clear-coat, and one is barbarically done with a jackknife. I ask: which degrades the game more?

Despite the addition of the nudity, the restoration looks absolutely stellar, as most Gameroom Collectibles restorations do. The machine is spotless, and obviously a lot of care was taken to restore it to its original lustre. Tracking down ramps for this machine back in late-2013 was quite a feat unto itself, as it predates Pinball Inc’s reproductions that appeared in April of this year. A new Classic Playfield Reproductions plastic set and a skull for the lock area round out the playfield work, while new cabinet decals erased the offensive penis. The latter half of the video highlights gameplay, and it looks to play fantastic atop the game’s glass-like clearcoat.

The host of the video tries to keep it as professional as possible…as professional as one can keep it when talking about a game whose main feature is “boobies”. However, there is an air of discomfort. He seems to be almost bashful when talking about the game, and averts his eyes when looking at the backglass–as if looking directly at the spherical masses of cartoon flesh will stimulate blindness. Nerves, perhaps, but the coyness appears genuine, as if there was a tinge of trepidation in the presentation of the overly erotic project. It sounds as if Jim from Gameroom Collectibles spearheaded the project to place in his own collection, yet has a difficult time talking about breasts in any sort of direct manner.

At the risk of alienating my (perceived) predominately male audience, I’d argue that this re-themed Elvira is just another instance of chauvinism within the male dominated world of pinball, and aligns itself with other sexist phenomena that have recently popped up to objectify the female form in cases where no objectivity was present: the nude (or nearly nude) backglasses for Monopoly and Wheel of Fortume (available on eBay) or the Luci/Helen “sexy devil” themes available for AC/DC come to mind. Collectors who grew up playing games with less overt forms of objectification are now employing modifications that take female objectification to the nth degree. There has been a steady increase in the number of women players in recent years and it is great to see that they have embraced the pastime, however these “mods”, as described above, work to toe the historical party line of sexism, to extreme ends, and further push the hobby deeper into the realm of the male collector/player. 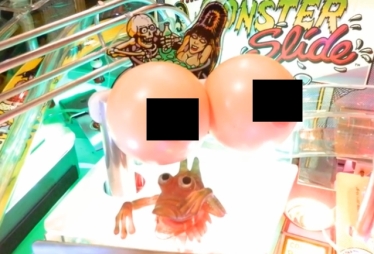 Really, my opinion doesn’t matter in the grande scheme of things. Bare breasts wouldn’t work in my gameroom, but they may work in someone else’s. Jim from Gameroom Collectibles is adamant to let his audience know that the custom machine is “Girlfriend Approved”, meaning that his partner doesn’t mind the bare breasts appearing in his collection (a form of the quoted term was used on Pinside as well as in YouTube comments). In discussing this article with my wife, she chuckled when I described the dancing plastic boobies, shooting my theory of sexism straight to hell. She said that as a woman, she didn’t find it THAT offensive, and that my stance may be a little uptight. She then reasoned that my problem with this particular Elvira machine lies in two areas, neither of which mark me as a complete prude. The first being the total short circuiting of the Elvira character’s approach to comedy (discussed above), and the second being that of a pinball purist, seeing a machine being modded in such a way that adds little to the overall game and removing it from its place within pinball history. My wife went on to state: “You guys love to modify your games. From what I’ve seen, mods either make the game look prettier or play better. The boobs don’t make the game play better, but maybe that guy thinks boobs make his game prettier.” Maybe she’s right. When placing the game in the greater context of pinball history, it becomes problematic. However, when taking the machine at face value, secluded from the underlying sexism in pinball, it is just a game made by a guy who wants to have some fun by objectifying Elvira’s bare breasts while enjoying his machine. I’m not sure if the game CAN be divorced from the greater context in my mind, but for some, it absolutely can. To me, if I want to look at boobs, I have other options of seeing them. My wife has a matching set and the internet is full of them, too. I don’t need to go out of my way to add them to my pinball machines.

The response in the community has been somewhat mixed. Some YouTube comments applaud the “fucking awesome[ness]” of what Gameroom Collectibles has done with their machine, while others find it problematic for a variety of reasons, with early Pinside responders describing it as “tacky” and “embarrassingly bad”. Whichever camp you are in, the discussion is good for pinball: drawing attention to the machines themselves and the attitudes of those who play them. I personally can’t bring myself to look at the machine divorced from the greater context, and further, I view it as just another barrier to keep the opposite sex away from the hobby. I wonder how Cassandra Peterson feels about all this?