I’m very good at buying games. I’m getting better at restoring games. But I’m absolutely dreadful at selling or trading games. My gameroom is something akin to a black hole or Jame Gumb’s basement: the things that enter seldom leave.

This was all well and good when disposable income and space were both plentiful. Recently, however, the household (ie. my wife) has tightened the purse strings on frivolous expenses and the basement is reaching absolute critical mass. I’m at the point where furniture would need to be removed to add more games. The once-promised sitting room, housing just “a few” games, where guests could be comfortably entertained, is bordering on a full-fledged arcade with little room for socialization. The eleven games in my current collection eclipses the maximum of eight that my wife once asked me to observe. I am at the point now where one game must to go if another is to come in. And that poses a problem for me. 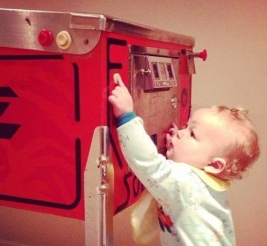 I’m not sure how many are affected the same way: I have completely fabricated a personal attachment to each of the games in my gameroom and I have a very hard time letting go. Of the games that I purchased with my own hard-earned money, I’ve only ever been able to bring myself to sell or trade one of them. And trading that one game was tough. Heart-breaking, even. Much more so because it was my very first game that I purchased back in 1995, a Williams Solar Fire which I have written about here. I traded it to a good friend who appreciates early Solid State games from the dawn of the 80s more than I ever will. In return, I got a Pin*Bot which came with an uninstalled Classic Playfield Reproductions playfield. I seized the opportunity to flesh out my collection with a game I enjoy one hundred times more than Solar Fire, but still, packing up that Solar Fire for delivery made me sick to my stomach. I had grown with it. It was the game that started the adventure of building a pinball collection.

I understand that these things are inanimate objects–heaps of steel, plastic and wood–and any feeling or attachment I have for them is a construct of my own subconscious, but it doesn’t help ease the distress. I’ve got a whole laundry list of “important landmarks” I can attach to each of my games: the first game I got when my son was born, the first game I completely restored from the ground up, a copy of the game I played endlessly with my father at an arcade when I was growing up. I’ve manufactured reasons to horde these commercial oddities in an unhealthy fashion. I suppose others are affected to a greater extent: whereas I’m reluctant to let go of any one of my eleven fully working games, others have trouble letting go storage units full of games that aren’t even on legs! We’re listening to the same radio station, just consumed at different volumes, I guess.

There is also the fact that I covet the value of the bird-in-hand, as opposed to the two that may be in the bush. If I let go of my Addams Family, when will I ever be in a position to get another if the market continues to trend upward as it has over the past few years? To replace a game with another copy in the same (or better) condition at the price point I have originally acquired it would prove to be difficult. I’m more of a “stand pat” kind of guy rather than throwing caution to the wind, and that complicates things.

Collectors say it all the time: “You can’t keep’em all!”. And it’s true. Gameroom turnover keeps things fresh, and rejuvenates one’s interest in the hobby. But, I’ve come to love the little intricacies of my games, tinkering with them, making them “my own”, bringing them back to life. I probably enjoy twiddling about in the backbox or under the playfield just as much as I do playing the games. Don’t get me wrong, I probably average about twenty minutes a day in the gameroom actively flipping, however, working on games and playing them with any high level of expertise are two unique skill sets. For many like me, there is little overlap. I’m firmly in the “collector camp”, as my playing skills leave much to be desired. This is probably another reason for my unwillingness to let go: I’ve become heavily involved in making them perform at their absolute zenith rather than just playing the snot out of them with reckless abandon. I’m like a mad scientist who forbids the angry mob from harming the monster he created.

I promise, I’m not a freak.  I’m not sleeping under the machines or gently stroking them while whispering sweet nothings of how they’ll be waxed later in the week. My wife isn’t being supplanted with Pin*Bot. I just need to learn to let go. I need to suppress these manufactured emotional connections I have. They can’t all be keepers. All still water will get stagnant eventually.

White Water, reluctantly packed up and ready to leave.

So, two weeks ago, I overcame the manufactured odds and traded my second game. I had to let another escape, if only for my own sanity. I traded my White Water for a World Cup Soccer ‘94 and some cash. The White Water wasn’t collector quality–the cabinet was beat, however everything under the glass was really nice and it was solid as a rock for the three years I had owned it. I liked the game. One of Nordman’s best, for sure. Diverse gameplay, unique layout, fantastic art and perhaps the best music ever created for a pinball machine. But it wasn’t getting much play by anyone other than me. When guests would visit, White Water wasn’t given a second look. Even my three-year-old son, who indiscriminately, yet passionately, flips away on all the machines, gave the game the cold shoulder. On the other hand, I really wanted a World Cup Soccer. My collection was devoid of a John Popadiuk-designed game, and World Cup is the only one of his that can be had without breaking the bank. More importantly, my three-year-old son has played soccer since he could walk and has really taken to the sport–I thought he’d get a real kick out of the game (pun intended). A really, really nice one became available, and my potential trade partner wanted my White Water in return. I came close to pulling the plug at a few points during negotiations, but I finally cut the cord, folded up White Water with little fanfare and brought home a World Cup Soccer ‘94. (Not having moved a game OUT of the basement gameroom proved to be a blessing in disguise for all these years–turns out they are much more heavy and awkward to remove than they are to put in). A friend of mine says that with each game exiled, it only gets easier to see them leave. I hope he’s right.

Any regrets I had about the trade quickly eroded when I lifted the backbox on World Cup and my son, standing on his overturned milk-crate softly cooed: “Soccer ball pin ball…my favourite!” His eyes were like saucers and he was grinning from ear to ear as he took in everything from the cartoon dog Striker on the backglass to the rotating soccer ball on the playfield. During his first game he raised his hands in victory when he scored his first goal, only to have the ball immediately drain while he was celebrating as it was kicked back to the right flipper. On separate occasions, he excitedly tried to explain to a lady at the library and his long-time soccer coach about our new gameroom acquisition. Neither could understand him, as excitement turned him into a complete marble-mouth. I had to explain on his behalf. I then had to explain further that, yes, we did have a full-sized pinball machine in our basement, and, yes, we did have more than one. 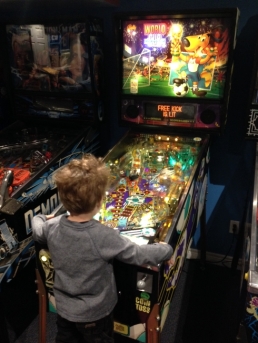 The boy playing his new favourite game. Made the trade worthwhile.

Only today am I struck by the irony: World Cup Soccer is the game my son now runs to first when we visit the gameroom, and he has even started to refer to it as “his” game. Thus, the kid is a chip off the old block when it comes to forming emotional attachments to pinball machines. Looks like we got another keeper on our hands and a potential problem when it comes time to get rid of World Cup Soccer. However, my emotional attachment here isn’t with the machine…clearly, it’s with my son. And that’s something that can’t be fabricated.